Ram Darbar(Ram,Sita,Laxman And Hanuman) Statue Sita Ram Brass Religious God Idol Perfect couple Sculpture.This is religious home temple sculpture and pooja shrine. Rama which means ‘one who permeates and who is present in everything and everyone’ is the seventh avatar of Vishnu. Sita is also regarded as an avatar of the goddess Lakshmi, consort of Vishnu. When Vishnu took on human form as Rama, Lakshmi took on human form as Sita. Lakshmana ( Laxman ) Lakshmana was a half brother to Rama. He accompanied Rama and Sita in their exile, and shared their struggles. In the great battle with Ravana, Lakshmana was fatally wounded but was restored to health when Hanuman brought to the battle field the mountain on which grew special healing herbs. Hanuman Hanuman, whose image is in the form of a monkey, is particularly associated with the Ramayana, the story of Rama and Sita.

There are no reviews yet.

Be the first to review “Brass Ram Darbar” Cancel reply 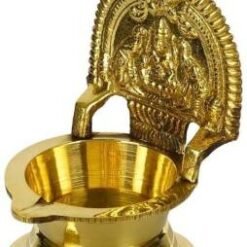